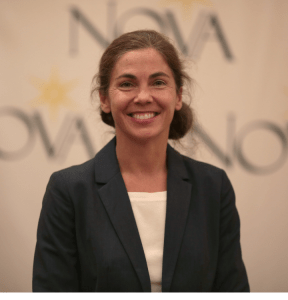 Alexandria, VA.¬†¬† The National Organization for Victim Assistance (NOVA) Board of Directors is pleased to announce its decision to appoint Claire Ponder Selib as its Executive Director overseeing all operations of the non-profit victim assistance organization.¬† Founded in 1975, NOVA is the oldest national victim assistance organization of its type in the United States and is the recognized leader in victim advocacy, education and credentialing.¬† Since its inception, NOVA has played a prominent role in the development and recognition of crime victims‚Äô rights and services.

‚ÄúThe Board of Directors is delighted that Ms. Selib will be serving as NOVA‚Äôs chief executive officer effective immediately,‚ÄĚ said NOVA‚Äôs Board President, Andrew Yurick.¬† ‚ÄúShe has been a driving force behind much of NOVA‚Äôs recent innovative programming, developed under her role as Deputy Director, and now we look forward to her experienced leadership as Executive Director.‚ÄĚ

Selib has a long history in the field of victim assistance beginning her career in a hospital-based sexual assault services program and was a guiding force in supporting victims of sexual assault in the military prior to the Congressional mandate requiring training and certification for military sexual assault advocates.¬† She was first hired by NOVA to serve as Project Manager for the Department of Defense Sexual Assault Advocate Certification Program (D- SAACP) initiated by NOVA in cooperation with the DoD Sexual Assault Prevention and Response Office in 2012.

Yurick spoke highly of Selib‚Äôs leadership when he added, ‚ÄúClaire Selib has long been an innovative leader in the victim services field, bringing a victim-centered and trauma-informed foundation to so many of the programs she has initiated during her tenure with NOVA.¬† She is responsible for the NOVA Victim Assistance Academy and took that one step further with the development of the National Advocacy Leadership Center (NALC), both of which prepare and continue to educate crime victim service professionals across the country and around the world.‚ÄĚ

Tracking address: rayla-caafda@webc.trynova.org (do not email this address)