In 1987, in response to the murder of his brother Oscar in Albuquerque, New Mexico, Chief Justice Barajas abandoned his practice of criminal law and successfully sought the office of District Attorney for the 83rd Judicial District of the State of Texas, the largest geographical district in the state. As District Attorney, he established the first prosecutor-based victim center in rural West Texas since the creation of the 83rd Judicial District in 1893. In 1991, at the age of 38, he was appointed by the governor of Texas to the Eighth District Court of Appeals for the State of Texas, at the time becoming the youngest appellate judge in the State. In 1991, he was elected Chief Justice of the Court, at the time becoming the youngest chief justice in the United States. He retired from elected judicial service and took the non-elected status of senior justice in August 2006.

Chief Justice Barajas is a former member of the Texas District and County Attorneys’ Association and the National District Attorney’s Association. He served as a faculty member of the National Judicial College in Reno, Nevada, where he was an instructor on the use of information technology. He served as a designer of the State of Texas Judicial Commission on Information Technology and as the original Chair of the Texas Appellate Court Technology Committee. He served on the Texas Supreme Court Commission on Judicial Efficiency, its Task Force on Information Technology, its Task Force on Judicial Selection, the Texas Supreme Court Gender Bias Implementation Committee, as well as State Bar of Texas Crime Victims and Witnesses Committee. 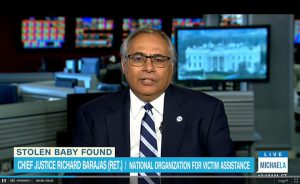 Chief Justice Barajas has made helping victims heal his life-long professional mission. He and his former law clerk, Scott A. Nelson, are authors of the Baylor Law Review article entitled The Proposed Crime Victims’ Federal Constitutional Amendment: Working Toward a Proper Balance. He is a former member of the Texas Council on Family Violence, the National Victim’s Center and served on the advisory council of the National Crime Victim’s Institute, then located at University of North Texas in Denton, Texas. Most importantly, he has been actively associated with National Organization for Victims Assistance for over twenty-five years, as a general member, an elected board member, and most recently as an advisory board member. He has served as the national chair of the NOVA Task Force on Identity Theft, a task force to examine the effects of victimization of identity theft and services which may be afforded those crime victims. A nationally recognized lecturer on the proper balancing of the constitutional rights between the criminal defendant and the intended victim, Chief Justice Barajas was honored by the President of the United States at a White House ceremony as a national recipient of the Presidential Award for Victim Services. He has advised the Department of Justice, Office of Victims of Crime and the Office of Violence Against Women on issues relating to human trafficking. In addition, he is a frequent victim-based lecturer on topics relating to The Victim Advocate and the Criminal Justice System: A Judicial Perspective; Essential Leadership Qualities of an Effective Victim Advocate; The Crime Victim and the Criminal Defendant: Working Toward a Proper Balance; Prosecutorial Ethics and Victim Rights; The First Amendment: What Every Victim Advocate Should Know; and, The Crime Victim in the Criminal Justice System: The Various Stages of Recovery.

Tracking address: abigash-ccbbch@webc.trynova.org (do not email this address)